Grandiose diplomatic scandal: the Russian Consulate in Kiev, reissue the estate of Ukrainians in occupied Donbas 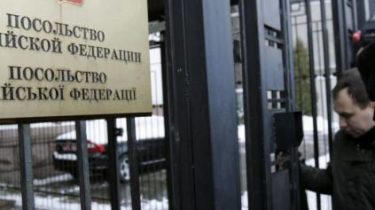 The Russian Embassy in Kiev has real estate operations in the temporarily occupied parts of Donetsk and Lugansk regions of Ukraine. Bypassing the Ukrainian legislation and international agreements the Russians draw up the documents for housing, which remained under the control of terrorists “DNR” and “LNR” territories, says the story TSN.19:30.

Galina – a refugee from Lugansk, which has helped TSN to expose this fraud. The woman wanted to sell his apartment in occupied territory, and repeatedly appealed to realtors, but they sent it to the Consulate of the Russian Federation, which allegedly issued a power of attorney that is valid on the territory controlled by terrorists. The journalists were deployed at the entrance to the diplomatic mission and explained that even for simple power of attorney need to pre-book an appointment at the Russian Consulate, to wait a month, while workers dipuchrezhdeniya check the data, and only then, call a meeting to go to. Costs about a thousand hryvnia, documents to confirm ownership of the apartment to have not need only a passport and passport data of the person who issued a power of attorney.

To shoot a reception in the diplomatic missions Galina was a mobile phone camera. Obviously, this situation is not unique, because just before the woman in the queue was a man who was granted a power of attorney for the sale of housing in Donetsk. Galina also a worker of the Embassy immediately offered to leave her apartment in Luhansk on the spot. For attorney in diplomatic missions were asked to pay the 970 UAH and assured that the document will be applicable in Lugansk. “Yes, will”, – said the employee of the Embassy. Soon certified by the Russian Embassy in Kiev, the power of attorney was in the hands of the journalists of TSN. It clearly shows that it was issued by Russia to Ukrainian, which transfers the rights of Ukrainians to the apartment in Lugansk, and due to this power of attorney does not belong to Ukraine.

The Ukrainian foreign Ministry said this fact shocked. Diplomats say that the Russians had violated several articles of the Vienna Convention. “Guided by article 55 of that Convention should be noted that the consular officer in the country of accreditation must comply with the legislation of the host country – first. Second, they do not interfere in the internal Affairs of the host country. This is totally unacceptable. This confirms the presence of the Russian Federation on the temporarily occupied territories”, – said the head of consular security Vasily Kirilich.

The Ministry of justice of Ukraine warned that the transactions in the ATO zone on the basis of such documents, will not be recognized by the Ukrainian legislation. “Transactions concluded on the basis of such power of attorney on the territory of the ATO, have incomplete. That suggests that these documents are imaginary, and they will in future be deprived of the right legal document management on the territory of Ukraine”, – said the head of supervision of the notary Department of the state registration and notary Nicholas of smuk.