“Greeted with fighters like family.” Gerashchenko insists on reducing the number of Russians in the OSCE Mission 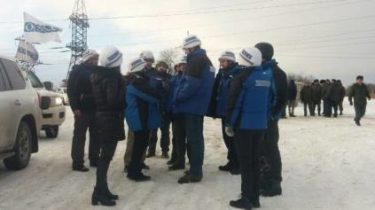 Kopiranje OSCE observer in front of the militants is a violation of ethics, and not “negligence”.

About this on his page in Facebook wrote the first Deputy speaker of the Rada, Ukraine’s representative at the talks in Minsk, Irina Gerashchenko.

According to Gerashchenko, such actions are not surprising, because sometimes the coordinators of the OSCE Minsk group is a strange position.

“For example, the OSCE coordinator in the humanitarian group Tony Frisch refused to attend in the Starobelsk SIZO Russian Ageeva, saying, “that would be political and not humanitarian visit”… Although it sounds like a blatant unwillingness to see the obvious – the Russian Federation is a party to the conflict and its soldiers are fighting in Ukraine, and law enforcement agencies are in full control of ORDO”, – said the first Vice-speaker of Parliament.

However, Gerashchenko thanked the mission of SMM OSCE for their important, difficult, dangerous work, and assured that “of course, will never close their eyes to violations of ethics and principles of independent monitoring”.

“And we stand firmly on the position that the Russians did may not be in the UN peacekeeping mission”, – she summed up.

The OSCE justified for an observer who , like family , greeted with the militants, they say, is just folly. …

We will remind, earlier in a Network there was a scandal because of the fact that on 25 November a Russian observer of the Special monitoring mission (SMM) of the OSCE saluted the militants “LC” during the transfer of the bodies of those killed in the Donbass soldiers of the Armed forces of Ukraine.

Later in the OSCE stated that kopiranje of the observer Mission before the action of “LNR” is “involuntary gesture“.