Legal funeral Pets in Kiev will be impossible a few years 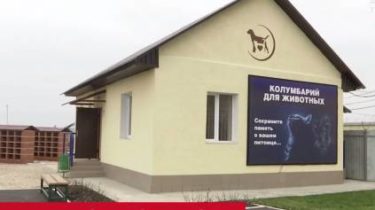 In the capital it is impossible legally to bury the animal. Despite the pain of losing a pet, to dig his grave the people of Kiev have their own – usually somewhere in the parks or under bridges, said in the story TSN.19:30.

Some places in Kiev has formed a natural pet cemetery with tombstones and even benches to commemorate. But the place is the size of 4 hectares on the street Puhovski where there should be an official crematorium to the cemetery in 2003 and not used as intended. There is already erected an office building and a funeral hall, but not enough of the premises of the crematorium and columbaria. The construction stopped in 2012 under expenses 14 million. Legally the object was changed several times by the customer, it is now a city hospital of veterinary medicine. She counted 52 million necessary to begin operation of the facility.

While the budget request is not approved, it’s legal to bury an animal can only be in Borodianka near Kiev, where the crematorium disposes of animals together with the biological waste. However, many people of Kiev did not like.

To learn the capital could have Kharkov, where a crematorium for animals has been in place for five years. Cremation there costs 500 hryvnia, and the storage of ashes – from 57 USD per month. Services companies used by about 40 people a month. The remains of the animal can be long does not store, and scattered over the garden of remembrance, which settles nearby. In the spectrum of services is even out in the car with the remains of the animal. And 10 kilometers from Kharkov there is a pet cemetery, though at higher prices. “We have from the first row to the fifth burial is 3400, 2400 and then. For people who have no skills, no money, we have such a thing as beccari pit – a pit 10 by 10 metres with live bacteria, where drops the body of the deceased pet. This is a more budget option, which costs 200 hryvnia,” – said in the cemetery.

The penalties for refusing sterilization and newboro. In the Parliament want to register animals in Ukraine

While in Kiev will not be anything similar and legal in the improvement promised to be sensitive to natural cemeteries and domestic animals not destroy them.