Night on the Maidan: activists gathered in three nights for the memory of the anniversary of the crackdown 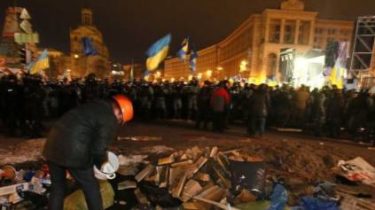 Today, November 30, at three o’clock on the Maidan in Kiev activists gathered, which four years ago at the same place and at the same time, was beaten by Berkut officers. Each year, the participants of those bloody events going under the stele to remember how it all happened and to celebrate the anniversary.

This is stated in the story Natalya Nagornaya in the program TSN.Ranok.

On Independence square, people came with Ukrainian flags. They drank tea, listened to music and reminisced about the night that changed Ukraine.

Activists believe that near the stele should put a memorial sign.

“You can’t erase a memory,” says one of them.

Night on the Maidan is the continuation of the program of marking the fourth anniversary of the brutal crackdown. Wednesday, November 29, nearly 300 activists and participants of the past events gathered for a rally and went around the city center with torches. From Independence square to the column of people marched to the presidential Administration, and then – in the Ministry of internal Affairs. Near the administrative buildings and demanded from the authorities to investigate crimes against the Maidan, which still almost no one is punished. Earlier in the Prosecutor General’s office reported that a prisoner only has one aunt.

The building of the interior Ministry, there was a violent crackdown of a peaceful action – the four activists were detained, but later released.

Recall that four years ago the ex-the President Victor Yanukovych signed the Association agreement of Ukraine with the European Union. In the center of Kiev began Euromaidan. November 29 in the evening, when the main square of the country went political leaders and performers, there remained only the indignant students. The middle of the night November 30, the crowd dispersed and severely beaten by Berkut. Students pursued and were caught on the streets. The youth sought refuge in the Cathedral of St. Michael. While there was carnage on the Maidan brought the Christmas tree and began to force install.

These events have caused mass outrage among the population. After a day on the streets of Kiev came a record number of people – according to various estimates, from one to one and a half million people.