Trolling for the Ministry of defense screenshot from the video games and newborn rare tiger cubs. Positive news of the week 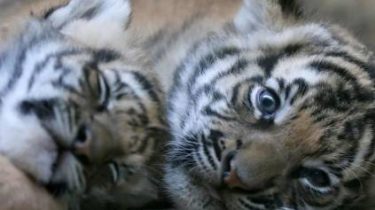 Over the past 7 days, the Ukrainians were laughing at another lapsus of the Russian military and stare at the clip of French rapper, filmed in Kiev.

TROLLING FOR THE MINISTRY OF DEFENSE SCREENSHOT FROM THE VIDEO GAME

On 14 November, the Russian defense Ministry has published in social networks photo, which allegedly showed U.S. support combat-ready detachments of militants “IG”. However, in social networks immediately noticed that one of the Ministry of defense published photos is a screenshot from the mobile game “AC-130 Gunship Simulator: Special Ops Squadron”. “And then Ostap suffered” users online now no stopping the jokes.

The @mod_russia uses images from a computer game as evidence the US is working with ISIS https://t.co/8uv2vbEHeQ pic.twitter.com/EvqP1Id5pR

The Russian military after the exposure still had the presence of mind to remove his failure. However, official comment from the Agency until it was.

The defense Ministry has published evidence of secret negotiations, the CIA and militants DL

In China, the robot successfully passed the medical exam. He scored almost a hundred points higher passing. For the exam, which is compulsory for all doctors in China work was prepared by a team of specialists. They loaded up in his memory dozens of books, and was invited to teach electronic physician these medical experts.

TWO OF THE WINNING LOTTERY TICKET IN THE SAME FAMILY

Two of the winning lottery ticket in one day managed to pull the American family in North Carolina. A Grand prize of one million dollars for one ticket and 10 thousand on another, a woman named Michelle Satler received in the local lottery. The winning tickets they came within the hour.

Videoamerican pulled two of the winning lottery ticket one day

THE BEGINNING OF THE NEW YEAR’S OPERATION SANTA CLAUS

In his residence in the town of Himmelpfort that in the East of Germany returned Santa Claus. The fairy grandfather on the first working day came on a bright yellow post electric. From your office Santa will answer children’s letters from around the world.

In the zoo of Prague showed newborn Malayan tiger cubs. Babies only six weeks, the vets are optimistic and give them every chance of survival.

Cares about them the mother of 11 – year-old tigress Banya. A boy and a girl gain weight quickly. And although the cubs made only tentative steps in the cage, they already behave like real tigers.