Ukrainian boy and war-confetti. The Network exploded a clip of French rapper, filmed in Kiev 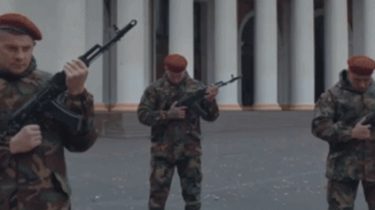 Clip of the artist was filmed in Kiev.

In the video you can find out the location of the Postal square, exhibition center and other areas of the capital.

During the clip, the performer together with a boy ride in a police car different districts of Kiev and wandering the streets of the capital.

At the end of the video the boy says the Ukrainian language “Never believe what is written.”

It is noteworthy that in the video there are military, which explode in gold confetti.

In the creation of the song took part famous by Stromae.

The clip has caused a furor in the Network. In YouTube in just a few days it was viewed more than 3 million users.

By the way, the capital of Ukraine, the rapper fell in love with for a long time, since his previous video for the song “Basique”, he took on the unfinished Podolsko resurrection bridge.

Recall that the promotional video of the new generation of the Apple Watch, filmed at the Central train station in Kiev, created with participation of Ukrainian production Studio Radioaktive Film.

The video was shown in the new theatre of Steve jobs to Apple during the presentation of new products from Apple. The footage was lit Central station of the Kiev metro station “Golden gate”.