“Ukrposhta” wants twice to raise the cost of newspaper delivery 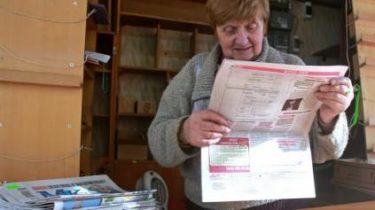 In six months, from July 1, 2018, “Ukrposhta” wants to increase by 50% the cost of delivery of Newspapers and magazines. And from 1 January 2019, the another 50%. That is, in General, during the year prices will rise in two times.

“Our colleagues, the editors of the Newspapers from Kiev and regions, complain about the poor postal delivery of the journals, the reduction of post offices in the villages, a non-partnership relationship with the regional directorates. And we all acknowledge that the future of Newspapers depends on the quality of “Ukrposhta”. At the same time, the management of PJSC “Ukrposhta” (first Deputy General Director Alexander Cherniavsky) said about the economic problems of enterprises caused by the depreciation Fund, increase in the minimum wage, the loss-making rural network of branches and state regulation of tariffs”, – wrote in Facebook the head of the National Union of journalists of Ukraine Sergey Tomilenko.

He also said that “Ukrposhta” introduces a discount on the editors editorial membership, is planning to attract loan funds for timely payments to the Newspapers, to respond to specific complaints of Newspapers.

“But. PJSC “Ukrpochta” will start the procedure of raising tariffs for delivery of Newspapers by subscription from 1 July 2018. The published intention is the gradual raising of tariffs for Newspapers – an average of 10 cents for the delivery of one copy every six months, starting from the second half of next year. Thus, according to the proposal NUJU, there is the option of a moratorium on the review of shipping rates and regional editions of the ATO zone,” said Tomilenko.

Heavy conversation just a NUJU with the leadership of PJSC “Ukrposhta”. Our colleagues, the editors of Newspapers from Kiev and…

We will remind, earlier “Ukrposhta” signed an agreement with publishers on gradual increase of tariffs for reception and delivery of periodicals from July 2017. In particular, from 1 July they increased by 50% from previously planned increase in the cost of delivery, and from 1 January 2018, the rates will rise to a level that was previously provided by the Ministry of infrastructure (48%). This writes UNIAN.

The leadership of “Ukrposhta” notes that the gradual alignment of tariffs to cost levels will enable the enterprise to only partially reduce the loss of services in 2017.

“Ukrposhta” decided to buy the Bank and develop finuslug

February 23 this year, the national Commission exercising the state regulation of communications and Informatization, agreed to “Ukrposhta” increase of tariffs for services on average for 49.4%. In particular, the tariffs for sending postcards, letters, parcels, registered letters, according to this decision, increased by 59.6%, shipment of parcels by 22%.