As a result of collisions under the house, Saakashvili arrested 5 people 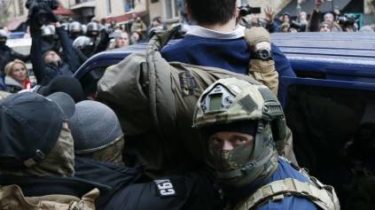 In clashes near the house of ex-President of Georgia Mikheil Saakashvili law enforcement authorities detained at least 5 people. There are also affected.

This was announced by the representatives of the interior Ministry UNIAN.

“Several people were detained for resisting law enforcement. I personally witnessed the arrest of five people…they actually arrested, but their actions will still be given a legal assessment, it may be the administrative responsibility”, – said the Director of the Department of communication of the Ministry of internal Affairs Artem Shevchenko.

“And this enemy will not wish.” The Kremlin’s reaction to the situation with Saakashvili in Ukraine

He also added that the legal assessment of their actions will have in the police Department.

Also detained the woman who smashed the window of the car in which militiamen were carrying Mikheil Saakashvili.

According to Shevchenko, some of the participants in the event medical treatment was provided. Among them were representatives of law enforcement agencies. The exact number of victims in the clashes is still unknown.

Earlier, on 5 December morning colleagues, Saakashvili said that the apartment policy unknown knocked the door. Later it became known that eks-the head of Odessa region climbed onto the roof of the house, where she lives. There he was hiding from security forces. Also there was information that Saakashvili threatened to jump off the roof if he was approached by law enforcement agencies.

Later it became known that the ex-President of Georgia, Mikheil Saakashvili, was detained for suspicion of receiving funds from oligarch Yanukovych Sergey Kurchenko.