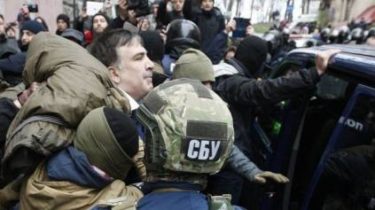 Prosecutor General Yury Lutsenko reported that the leader of the “Movement of new forces,” Mikheil Saakashvili financed their campaign in Ukraine due to the criminal group of the President-the fugitive Victor Yanukovych.

He said this at a briefing today, 5 December.

He published the first part of the operation of the SBU and the General Prosecutor’s office regarding the failure of the “plan of revenge programlisting forces in Ukraine.”

“It concerns the cooperation of a number of politicians, first and foremost Mikheil Saakashvili with members of the criminal group of Yanukovych in the first place Sergei Kurchenko, money which Saakashvili and those close to him persons held funding resulting protests, the purpose of which was the seizure of state power in Ukraine”, – Lutsenko noted.

He added that he shares Saakashvili was aimed to contribute to the suspension of criminal prosecution of members of criminal group and to help him regain control over the assets.