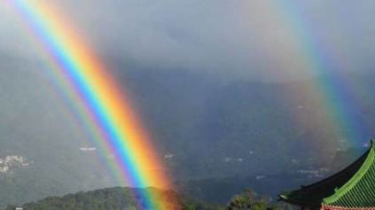 In the sky over the Chinese island of Taiwan admired the unusual rainbow – “fourfold”, that is, its brackets were duplicated four times. But the interesting thing is that this is a natural phenomenon lasted for nine hours.

The record was recorded by the teachers and students of Chinese culture University in Taipei, reports the BBC.

“It was weird and seemed like a gift from heaven. It happens so rarely,” said Professor of atmospheric Sciences вузf Chu Xuan kun.

Taiwan rainbow now claims the world record. The previous 6-hour natural phenomenon recorded March 14, 1994 in Yorkshire in England and made it into the Guinness Book of records.

The usual rainbow last up to hours.