In the Lyceum, there was a real military ball 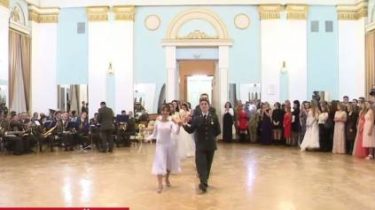 Four military dozens of high school students had the honor to participate in the ball. This privilege provided for academic success, says the story TSN.19:30.

The action participants prepared more than a month – practiced movement, posture. In the opinion of management, such measures should develop pupils of the Lyceum named Bohun, not only as military but also as a cultural people officers who will be proud of the country. Together with the guys to waltz agreed participating maiden dance group, and even relatives of the military.

In Kiev, preparing charity ball of the ATO participants and volunteers

For the feast on the floor left even the Hero of Ukraine Igor Gordiychuk with his wife. “We’ve got an easy rehabilitation the dance,” explained seriously wounded in the ATO officer. The ball was opened by the drummers, followed by a Polonaise, which students were dancing in a new dress uniform, and the Wals came out and the adult officers. Also danced the polka, the jazz and everyone was happy.