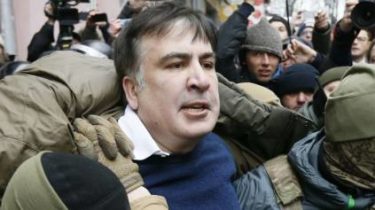 Ukrainians should start a peaceful protest against the President of Ukraine Petro Poroshenko and to demand his impeachment.

This was stated by the leader of the party “new force”, the former head of the Odessa regional state administration , Mikheil Saakashvili, after the activists broke down the door to the car and issued the policy.

“Glory To Ukraine! My beloved Kiev, my friends. Today the gang of Poroshenko on fake charges of trying to arrest me. In cahoots with Putin and in collusion with the Georgian oligarch. In order to remove from the Ukraine the main enemy of Putin for the post-Soviet space and the main fighter against corruption in Ukraine”, – he said.

The lawyer Saakashvili predicts the extradition policy in Georgia, where he faces arrest

Saakashvili also called on Ukrainians to come to the protest on the Maidan.

“I want to say that you – the great people of Europe. You can’t let those ignorant, arrogant huckster you to manage. You will not allow them to kill Ukraine. I will lay my life for the freedom of Ukraine and for liberation from the drug dealers, oligarchs. I want to encourage all residents to take to the streets today to gather on the Maidan and to begin the process of deliverance of Ukraine Poroshenko and his gang,” added the politician.

According to Saakashvili, the police support it and will take to the picket together with the Ukrainians.

“Millions of us, I was sitting [in the car] Sbushniki – they don’t like them. The police don’t like them. The army is on our side. All the way Sbushniki scolded the huckster Poroshenko. So do not be afraid, we are millions, we are strong, we are strong! Right now you need to go to the Maidan, to unite and engage in peaceful protest getting rid of Poroshenko, his gang, all of the oligarchs: Medvedchuk, Akhmetov, Kononenko from all the others. I want to say: do not be afraid! They should be afraid of us, they need to escape. They must make way for each of you. Thank you, my favorite”, he said.

At the end of his speech Saakashvili called on Ukrainians to move in the direction of the Verkhovna Rada and to demand there the impeachment of Poroshenko.

“I’ll stay to the end in Ukraine will die for Ukraine, I live for Ukraine. Because I owe you not only return to Ukraine, but now – my freedom and my life. My life belongs to you. I invite all to go to the Parliament of Ukraine and demand [answer] for the humiliation of the people and demand the impeachment of the President” – summed up the politician.