The artist who painted the spectacular mural on the police Department, avoids publicity 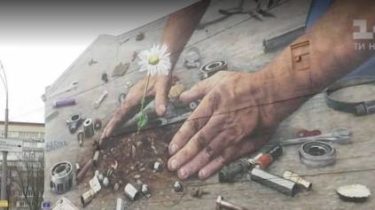 Kiev mural recognized as one of the best in the world. The figure at the end of Pechersk rayupravleniya police was in the top 7 version of the international edition of StreetArt.Today, according to TSN.16:45.

Called the painting – “Rise from the dust”. The author is an artist from new York. In the rain in the gray days, in the cold and under clouds of debris grows fragile flower. It has a wall of Pechersk rayupravleniya police. The author of the picture is an American artist with the alias bkfoxx. She flatly avoids publicity. And about his work on the social network wrote modestly.

“Thanks to all involved people, the Kiev mayor’s office and the police, thanks to the cafe bar on the street of Moscow, and also to all people in Kiev who make me feel at home”, – stated in the message.

Videomasti mural recognized as one of the best in the world

“When she painted, she did not expect such friendly people’s perceptions. Someone brought a cake for her, the man went to work – went bought her a chocolate. In America this is not – well, you paint and draw,” says the curator of the art project Art United Us Leo Geros.

Curator talks – because of the bad weather instead of the planned 10 days, the work lasted almost a month. The paint was not yet dry. Had to change the ticket to new York. The sponsors covered all costs. Leo says to access the police building was a challenge.

“World practice is that if you invite the top artists, then you have him no opportunity then to say “no”. But here I was warned that you need to wait for resolution, and everything turned out OK,” explains Geros.

Deputy head of the Pechersky police does not hide – to go to work in the building, he was pleased.

“In the process of reformation should go in the best direction. A very interesting idea. As far as I know, the artist himself took the prototype of his father, who worked for a HUNDRED and a flower he grew alone in those conditions,” – says the Deputy head of the Pechersky district management of national police in Kiev Alexander Lozinski.

The editors of the international edition of StreetArt.Today included this mural in the top 7 of the world muralov months. Chosen purely on aesthetic criteria. From 2015, the year of the house in Kiev began to revive. Somewhere – portraits of outstanding Ukrainians, some allegorical figures, somewhere- love story.