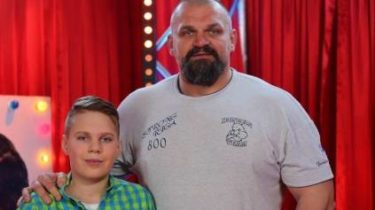 Vasyl Virastyuk, is still looking for witnesses of road accident in which hit his son. Weekend 14-year-old Adam was a pedestrian hit by a car and left, according to TSN.16:45.

On the video recorder one of the cars standing at the junction, seen as the guy crossing the road on a green signal of a traffic light. After a few seconds, it hit a gray car, which rotates with the secondary stripes and just leaving, despite the fact that the guy fell and lost consciousness.

Brought him to a sense of other drivers and helped pass on the sidewalk. Adam – a concussion, a leg injury and partial memory loss. The police opened criminal proceedings for violation of traffic rules. Video as down son, the athlete posted on his page asking for help to find this driver. If this happens, the driver faces up to three years behind bars.

“The man has committed an act once and it will repeat a second time. Hit a man and left, he did not stop and did not help, this is the most terrible, that is indifference,” says Virastyuk.