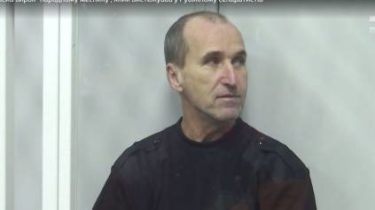 The appellate court of Luhansk region announced the verdict in the case of Vladimir Kozyuberda. It is called the “people’s avenger”, because the man in 2014 in Rubizhne tracked down those who stopped a column of Ukrainian military equipment, which is then shot by the militants, according to a story TSN.19:30.

Supporters of the “Russian world” Kozyuberda burned homes and cars. For this resident of Lugansk region court of first instance sentenced to 10 years in prison. Those who disagree with this decision, the patriots literally broke into the room to witness the appeal and to support like-minded. A panel of judges listened to the lawyers and prosecutors, and announced the decision: “a Sentence to cancel and assign a new trial in the court of first instance”. Kozyuberda the court of appeal has determined to change the measure of restraint from detention to house arrest in the evening and at night.

In Kramatorsk, the infamous teacher resigned after accusations of separatism

The announcement of the verdict, the audience applauded. “Pretty fair decision,” admitted Kozyuberda, which, after completion of the meeting released from-under guards directly in a court hall. The man believes that the re-investigation and the court will put everything in place, and acknowledges himself guilty of the burning of several cars and one house. Activists also claim that Kozyuberda defended thus Ukraine at a time when official power structures in Rubizhne were idle and did not respond to massive violations of the law and against the constitutional order and territorial integrity of the country. Local patriots are interested in, when, finally, law enforcement officers and judges shall take not patriots, and for the separatists.