The police said about the situation in March Saakashvili “For impeachment” 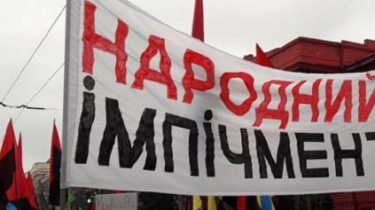 In Kiev the order during the March, the participants of which require the adoption of the law on impeachment of the President, following about 1,200 law enforcement officers, the situation is calm.

About it reported in a press-service of police of Kiev, the UNIAN news Agency reports.

Saakashvili received an official permission to spend the winter in Ukraine

“Law enforcement officers escorted the March, which, according to preliminary calculations, taking approximately 1,500 people. The action started in the Park named after Taras Shevchenko, and from there the column moved to the center of the capital. Follow the order of about 1,200 people: events are held peacefully,” the statement reads.

Recall, today, December 3, near the Park Shevchenko in Kiev began the “March for impeachment”, organized by the party “Movement new forces,” the ex-head of Odessa regional state administration of Mikheil Saakashvili. People chanting “Down with the huckster”, “Impeachment”, carrying placards with the promise of President Petro Poroshenko, who, according to the protesters, the President has not fulfilled. Along the route the protesters must walk the Boulevard of Taras, Shechenko to downtown, then to the alley hundreds of Heaven, where we will honor the memory of those killed during protests 2013-2014-second period. Via Mulberry street and Grushevskogo people will come to the European square, where they will hold a rally.