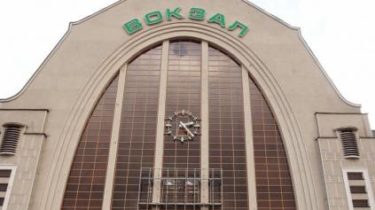 This reports the press service of Ukrzaliznytsia.

Bullies, psychos, the Russians who, more than 140 times this year mined Kiev

It is noted that all of the employees and the passengers evacuated. At the scene arrived employees of the Ministry of internal Affairs and the State service of Ukraine for emergency situations.

“Delays in the movement of trains, passengers boarding is via the adjacent building transitions. Order forms tickets purchased via the Internet, passengers can print out to suburban station Kiev-Passenger. Ukrzaliznytsia asks to remain calm and treat with understanding to temporary inconveniences”, – stated in the message.

Later in Ukrzaliznytsya said that information about the mining railway station in Kiev was not confirmed.

“After the inspection of all airport buildings no explosive devices of the Ministry of internal Affairs and the State service of Ukraine for emergency situations found. Now the station works in a usual mode. His work restored at 12:00,” – said the press service of the UZ.

Videokassette said about the explosives in seven airports, the Kiev metro and three shopping centers

This year “mining” in Ukraine have become a very common method of influence on the course of the life of major infrastructure. In Kiev alone has recorded more than 140 reports of explosive items in vehicles, shopping malls, railway stations, airports and the like. In November, the number of such calls has increased significantly. For example, in the evening of Friday, November 24, in room 102 received an anonymous call about the mining of all stations of the Moscow metro.