Against MPs who interfered with the arrest of Saakashvili, opened the proceedings 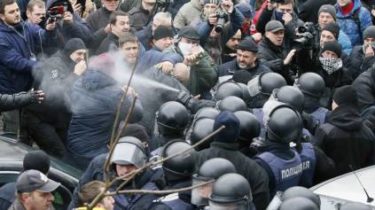 The Prosecutor’s office opened criminal proceedings concerning the obstruction of people’s deputies of the actions of the militiamen who have detained the leader of the party “new force” of Mikheil Saakashvili.

This was reported by press Secretary of the Prosecutor’s office of Kiev Hope maksimets, UNIAN reports.

“Included in the Unified register of pre-judicial investigations information concerning preventing people’s deputies of Ukraine the actions of law enforcement officers during today’s events (the detention of Saakashvili – ed.). Qualification – part 2 of article 343 of the UCU”, she said, but the names have not been released.

As is known, article 343 – “Intervention in activity of the employee of law enforcement body”.

The investigation is entrusted to the Main Department of the SBU in Kiev and Kiev region.