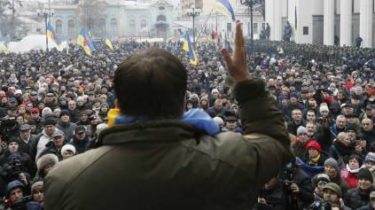 The leader of the “Movement of new forces,” Mikheil Saakashvili after escaping from custody, appeared before the Verkhovna Rada. He commented on the accusations of the GPU in cooperation with the oligarch-fugitive Serhiy Kurchenko, which was announced by Prosecutor General Yury Lutsenko.

“I accuse Lutsenko SBU of provocation, manipulation of facts, the creation of fake records, of which I warned a few days ago. There is a special Department, headed by Kovalenko. About the relations with the “Party of regions” can not be discussed. Poroshenko was the founder of the “Party of regions”. Poroshenko was cleaning the shoes of Yanukovych. They carried out the dirty provocation in the style of the FSB. They made a mistake: Ukraine is not Russia. Poroshenko will never be Putin because the Ukrainian people – freedom-loving,” said he.