Battle of the cakes. AMCU fined “kievkhleb” for the similarity of the packaging with the products of “Roshen” 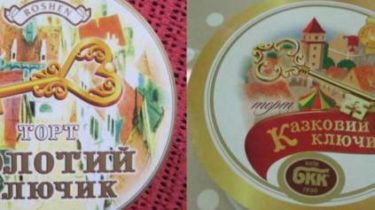 The Antimonopoly Committee of Ukraine fined “Kyivkhlib” 219 thousand UAH for the fact that the packaging cake production similar to the products of “Roshen“.

“Fined PJSC “Kyivkhlib” 219 thousand for violation of legislation on protection against unfair competition under article 4 of the law of Ukraine “On protection against unfair competition”, in the use of PJSC “Kyivkhlib” in economic activity in the packaging for confectionery products-cake “Fairy key”, which is similar to the packaging of confectionery products-cake “Golden key” production of the subsidiary company “Confectionery Corporation “Roshen”, which early began to use it in economic activity, which can lead to mixing with activities of DP “Confectionery Corporation “Roshen”, – noted in AMKU.

In “Kyivkhlib” argue that the packaging is different and will appeal the decision of the Antimonopoly Committee.

“In the case is sufficient evidence that suggests that the violation of competition law is missing – this research forensic expert and an independent survey conducted by a specialised marketing company. And the main proof is the use on product packaging of large images own brand “BKK”, which for many years is well-known buyers. This, in turn, refutes the conclusions of the AMCU regarding the possibility of mixing products, the company “Kyivkhlib” products Corporation “Roshen”. In addition, in making the disputed decision of the AMCU have undertaken not inherent powers of the body examination to establish the fact of similarity of packaging”, – stated in the message of “Kyivkhlib”.

Legal service of the enterprise reported that “Kyivkhlib” “configured in the legal field to prove the illegality of the decision of Antimonopoly Committee and to restore its violated rights and business reputation”.

Kyivkhlib
,
The Antimonopoly Committee of Ukraine