“Dentures trump”: the Network has ridiculed the speech of the President of the United States 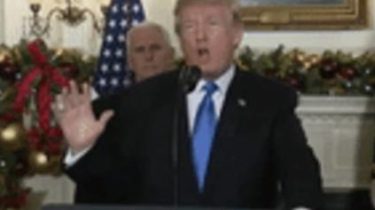 During one of his speeches regarding the recognition of Jerusalem as the capital of Israel and transfer to the city of the Embassy of the US President Donald trump showed the defects of speech in which too much was heard hissing sounds. Network on this basis has already appeared a new trend called “dentures trump”.

Nailsea resonance Internet joke gained after the release of the program the Daily Show with host Trevor Noah. In the broadcast he jokingly suggested that the US President probably wears dentures or during a speech to his neck he shot a dart with a paralyzing poison.

“Opens the gates of hell”: in Hamas reacted to the decision by trump to recognize Jerusalem as the capital of Israel

“Trump wears dentures. The fact that they began to fall, so the President was unable to complete the sentence. Have you ever seen something that trump was eating an Apple or a pear? Or generally any fruits and vegetables?” – ironically, Noah.

Trump announces that the U.S. will recognize Jerusalem as Israel’s capital and all hell breaks loose between his tongue and teeth. #DentureDonald
Full episode: https://t.co/DJZoI9j8Yo pic.twitter.com/nCciSWuJJ1

The joke was picked up by netizens and went on to create their own versions, and also supported the idea Trompowsky dentures.

Sooo this is interesting. Trump dentures are trying to escape his mouth as this speech is ending. Join the club dentures! Unbelievable. pic.twitter.com/QqYv7whxDF

“I can’t hold back the laughter. I thought he said “snakes” (instead of United States – United Snakes – ed.)”, – joked one Twitter user.

I can’t stop laughing I thought he said United

Later even joked that soon the trump will call information about dentures “false news”, or as it is more familiar sounds from English, fake news. After all, the President of the United States is famous for its attitude to some American media, accusing them of spreading fakes.

We will remind, the President of the United States Donald trump announced the recognition of Jerusalem as Israel’s capital.