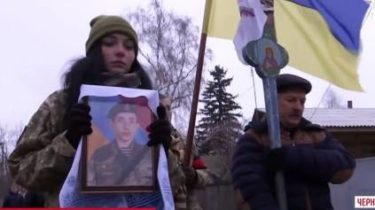 In the Chernihiv region said goodbye to Junior Sergeant of the 54th brigade Vladimir Maltsev. The fighter died a week before the muster, according to a story TSN.19:30.

Vladimir came to the military enlistment office without agenda in 2014 and signed a three-year contract. Was wounded under the Debaltsevo hospital immediately after he returned to the brothers to the front and fought still. But on 1 December, the soldier was fatally wounded during a mortar attack near the Trinity. “Hero, it’s just a man who came without agenda, without anything. He came already the first wave of mobilization ended and he came to pick me up in the army,” – says military Commissar of the district Nosovskiy Anatoly Halimon.

“That’s a guy! He knew the troops he served. Well done, brother,” says sister fighter Alexander Kornienko. 7 Dec Vladimir finished the contract, and in his native Likhachev fighter was waiting for two sons, a twin sister and a mother-volunteer.