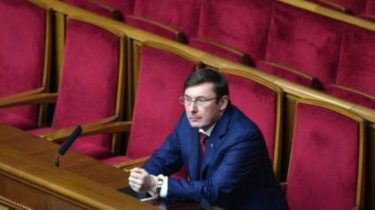 Prosecutor General Yury Lutsenko urged the ex-President of Georgia Mikheil Saakashvili to come to the investigators within 24 hours. About it the head of the GPU said, speaking in Parliament.

After this period, the politician will come again, the security forces, according to the attorney General.

“After 24 hours, the entire law enforcement system of Ukraine will do everything necessary to stateless Mikheil Saakashvili, who, obviously, connected with a financial transaction with the oligarchs, including from Moscow, appeared before the investigator for the presentation of suspicions, and then before the court, where prosecutors will seek house arrest for him. After today’s escape – this measure being questioned,” – said Lutsenko.

“I call on Saakashvili to exercise at least once courage and responsibility for their words, stop the lies, the mudslinging and come to the investigator of Ukraine to obtain legal way procedural documents”, – said the head of the Prosecutor General.

Note that from a tribune of Rada Lutsenko also said that for the help Saakashvili some MPs waiting for the responsibility. As presented by the list of names of eight deputies.

December 5 in the morning colleagues, Saakashvili stated that the policy in the apartment unknown knocked the door. Later it became known that eks-the head of Odessa region climbed onto the roof of the house, where she lives. There he was hiding from security forces.