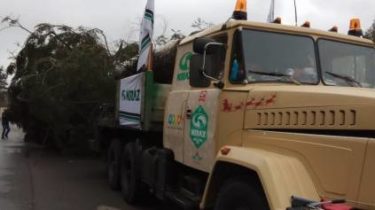 The main tree had to be delivered to the Sofia square in Kiev earlier in the day on 5 December, however, truck with Christmas tree lingered in the road.

This is stated in the message of the organizer of Christmas events in Kiev Folk Ukraine in Facebook.

“Due to congestion, the arrival of the Christmas tree delayed. We are also waiting for permission from police to enter freely into the streets of Kiev. Make every effort to quickly come to you,” – stated in the message.

Videografie of the capital boast the most stylish Christmas trees

Later the organizers added that the tree is now under Kiev and move to the capital before midnight. “We have a final push at the finish line, but unfortunately, our lush green beauty stands near Kiev without movement. On the streets of the capital would not let her patrol by the police. In Kiev, now a huge amount of traffic congestion that impedes the movement. Not to create the emergency, the Christmas tree will take off no earlier than 23:59 “, – stated in the message.

Note that the path of the main tree in the capital was extremely difficult. First, problems created by nature – the Carpathian mountains covered with snow, and the roads were blocked. But today the weather improved and the tree is still at 12:30 waited at the Sofia square. Around noon the Centre of the organization and safety of traffic of the enterprise “kyyivdorservis” reported on the passing cars with Christmas tree, measuring complex at the entrance to Kiev.

Recall, the current decoration of the winter holidays was born and grew up in Bohorodchany forestry. Tree to honor the mission of the foresters was looking for almost a week. Traditionally picked on the silver fir, because the needles did not crumble. The number of rings on the frame foresters identified: tree 91. She has reached the age when it is necessary to cut.

The Christmas tree is taken to the capital on the tractor KrAZ. Due to the large size of the tree police officers demanded that the tree was transported only in the daytime.

The first new year’s location in the cultural and artistic project “Nogod on Sofia”, organized by the Folk Ukraine, will open on 16 December and will run until January 14, 2018 on Sophia and Mykhailivska squares, Vladimirsky passage (from Mikhailovskaya square to the intersection with Alla Tarasova street).