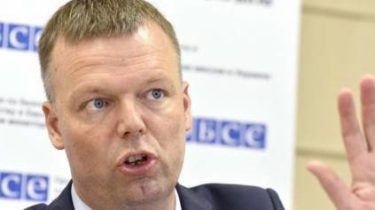 Representatives of the Special monitoring mission of the Organization for security and cooperation in Europe is ready for dialogue with the new leadership of “LNR”.

This was stated by first Deputy Chairman of the OSCE SMM Alexander hug.

“We have not figured out”: the inhabitants of the liberated villages of Donbass refuse to talk about the change of power

Hug also noted that the OSCE has a team in Donetsk and Lugansk, who are ready to conduct this dialogue.

“Just as I am ready to have these conversations, if this year I will visit Donetsk or Lugansk,” – said the Deputy Chairman of the OSCE SMM.

In addition, the BBC noted that the armed conflict in Eastern Ukraine can only be resolved “through dialogue”.

“Parties need to understand that this conflict will not be resolved locally, it can only be solved through dialogue,” he concluded.

Recall, November 25, Pasechnik has been appointed the new “head” of the so-called “LNR” after the resignation of Igor Plotnitsky.

Almost immediately he announced that he expects the integration to Russia together with Donetsk terrorists. And thanked the leader “DNR” Alexander Zakharchenko, expressing hope for further cooperation and fruitful work.