The price of veganism: Kiev family spends on “healthy eating” 10 thousand a month 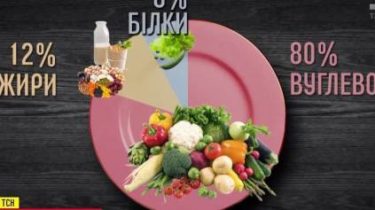 Sausage without meat, but at a price even more expensive – these products can be bought in Kiev shops for vegans, where to buy meals proponents of herbal diet. Vegetarians make burgers from flax, carrots and spices, and use a huge amount of greens – broccoli, avocado, lettuce, fennel, dill, parsley, spinach and the like, according to a story TSN.19:30.

The need for protein, fats and carbohydrates, which is considered the norm vegans, often do not coincide with the axioms of classical dietetics. Vegetarian diets contain too many carbohydrates, but twice as less than normal fat and suffers almost complete absence of proteins. Nutritionist Yana Kravchenko says that the menu meat-eaters, the daily “plate” consists of eggs, cups of yogurt, 150 grams of cheese, 150 grams of whole-grain cereal, 150-200 grams of meat or fish, 300 grams of salad, fruit and 40 grams of bread. In vegan products traditional norms could be measured by weight. “They have to seven pounds to eat vegetables and fruits a day,” says the nutritionist.

Videots found out how much money you spend on food vegetarians

Themselves supporters of vegetarianism insights traditional experts a little worried. But may be concerned about the cost of the diet – in the supermarket “healthy foods” chips from apples, bananas and nuts are sold at 30 hryvnia, sauces, pastes and pates are from 60, a sausage made of flour and spices will cost not less than 170 UAH per kilo. For family Onishchenko account at the checkout for Apple chips, pasta, seaweed and chocolate – 360 UAH. In General, to feed themselves, Onishchenko spend about 10 thousand hryvnia per month. “We get more than the average. But good quality food will never be cheaper. But we’re not here plyusuem medical costs,” say the vegetarians.

The end of the month of veganism. The main pros and cons of “vegetable life”

As reported for many when choosing a vegetarian way it’s viewing propaganda videos. The journalists gave on analysis the specialist of manipulative technologies Yuri Irina, to determine did the authors of the video techniques indoctrinate the viewer. The expert drew attention to the obsessive repetition of the same thought, different words. “This is a classic example of NLP”, he said. Irkhin convinced that the thesis of the film can penetrate deeply into the subconscious of the viewer and be stuck there for a long time. And this is confirmed by interviews with different vegan unfamiliar with each other people quoting the same video and say almost the same words.