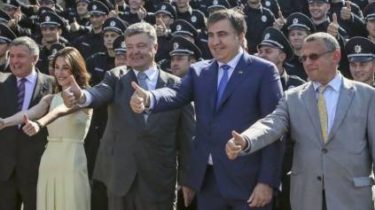 The President of Ukraine Petro Poroshenko commented on the situation regarding the leader of the “Movement of new forces” of Mikheil Saakashvili and suspicion, which gave him a GPU.

“Thought I was hard to surprise. But the fact that yesterday saw the whole country shocked and shocked. Thank you to SBU and the GPU for the professional protection of interests of the state. The army is not for holding the front that the enemy was operating in the rear. We give back financed from Moscow GOP company, and I feel this support from society,” he said.

Thought I was hard to surprise. But the fact that yesterday saw the whole country shocked and shocked. Thank you #SBU #GPU for the professional protection of interests of the state.

The army is not for holding the front that the enemy was operating in the rear. We give back propanamine from Moscow GOP company, and I feel this support from the companies.

He noted that the enemy is doing “all the big bet”, “to beat back, blow from the inside to destabilize the situation in the country.”

“I have already talked about this. In Moscow spared no effort … and money to burn – the names here at anything”, – said Poroshenko.

He added that the government respects the right of people to peaceful protest.

“It is extremely important that the right people were protected. We demonstrated in recent weeks, although the organizers really wanted blood, and strongly provoked the security forces,” – said the head of state.

Lutsenko called on Mikheil Saakashvili to come to the investigators within 24 hours. After this period, the politician will come again the security forces.

Police 6 Dec tried to storm the tent camp near the Council, but met with resistance from activists. As a result of opposition from both parties there are victims. The police said that together with SBU held events for search and detention of Saakashvili. However, they failed to carry out the operation.