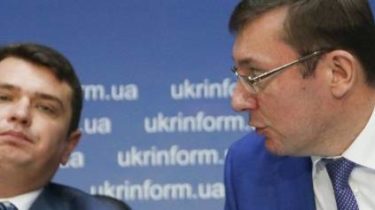 Prosecutor General Yury Lutsenko is convinced that the head of NABOO Sytnyk went to the United States, there to discredit him and all law enforcement agencies.

About this Lutsenko said during his speech in the Verkhovna Rada.

“Sytnyk in the United States launched a flurry of activity to raise the entire community, particularly our partners in the joint activities of the FBI to discredit the attorney General and all law enforcement agencies of Ukraine. He claims that I threw the first stones in the back and then turned out in the face of the FBI, saying their activities on the territory of Ukraine illegal. It is the manipulation of words. Literally, I commented on the rush to the briefing: “One and the second meant “amber” and the case in the Migration service activity was conducted jointly with the FBI”. The FBI and our other partners cooperate with us in the framework of legal assistance: exchange of information, provision of expert opinions and the like. However, operations on the territory of Ukraine of any other intelligence or law enforcement body of another country is impossible. This was stated and the FBI: “We do not conduct operations.” I’m happy,” – said the Prosecutor General.

Day sensations and scandals. What Lutsenko told about Saakashvili, MPs and the “family” Yanukovych

“But what he says is silly, choosing his words Sytnik, I can admit that he was wrong. But what to organize in the United States a whole campaign to discredit the running by him of misinformation, not clear to me. I think this has signs of this: the young leader of a young unit, unfortunately, has not coped with compliance with applicable laws in its activities. Instead of admit mistakes, to sit at the table, perhaps to change the law to change their practices, calling for help elders, so they said that actually this is not a dirty substance, and jam,” said the head of the GPU.

The attorney General offers a way out of the situation.

“I urge everyone to stay calm, first and foremost, the leaders of NABOO, and offer the following: the relevant committees to draw up a law on NABOO, in which relevant articles to specify that all employees of the NABU, but tacit of staff recruited on open competition. It will take one day and one day in Parliament. To get a license and register all SBU proslushivaniya devices that can be used after such registration. Thirdly, to ensure the exchange of information with SAP during all the action for the OSA, NSG and other investigative actions. Sytnik statements that specify the procedural head Gorodnitskogo are null and void – to throw out from your vocabulary. Public attacks on the legal position enforcement has to stop,” – said Lutsenko.

He added that “unfortunately, the criminal liability for mistakes is bound to be. In the first place of the head office, which, by law, has the authority and responsibility for compliance with all the rules, he violated them”.

Earlier it was reported that Sytnik Lutsenko wrote a complaint to the anti-corruption Prosecutor nazara Golodnitsky.