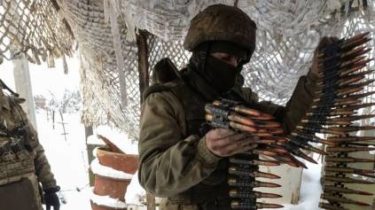 Over the past day was recorded 27 violations of the ceasefire regime by terrorists. As a result of shelling none of the Ukrainian military in the Donbass was not injured.

On Lugansk the direction the day was the one fixed firing positions from 120-mm mortars in the area Novoluganskogo, in the evening fighters repeatedly from 82-mm mortars, grenade launchers and small arms fired at the Ukrainian defensive fortifications near Luhansk. From grenade launchers they fired at positions near the May and Novoaleksandrovka, from light infantry weapons – Lobacheve and Luhansk.

The construction of the Press center of the ATO headquarters on 6 December 2017, the Russian occupation troops continue to fire on positions …

Posted by the Press center of staff ATO on Wednesday, December 6, 2017

On the Donetsk direction the day it was hottest on the sea of Azov. Here terrorists from mortars of various types and arms of smaller caliber repeatedly fired a number of settlements on the outskirts of Mariupol, in particular Water and Starognatovka. Military in Shirokino fired tank. Rocket-propelled grenades and small arms fighters fired at the Ukrainian positions in the area of Hnutove.

In the evening the epicenter of the confrontation from the Azov sea has moved to the suburbs of Avdeevka. The military in the area have repeatedly fired from infantry weapons and mortars.

Earlier the President of Ukraine Petro Poroshenko said that during the whole period of the antiterrorist operation in the Donetsk and Luhansk oblasts killed more than 2750 Ukrainian soldiers.