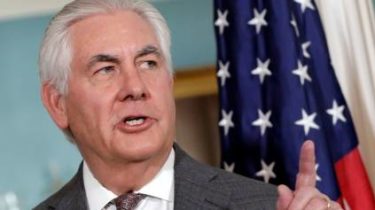 This at a press conference at NATO in Brussels said the Secretary of state Rex Tillerson, reports “Voice of America”.

“Russian aggression in Ukraine remains the biggest threat to European security and requires a permanent transatlantic unity in confronting this threat. Our allies in NATO strongly supports Ukraine’s sovereignty and territorial integrity. We do not accept the efforts of Russia, which is trying to change the internationally recognized borders of Ukraine, and does not recognize Russia’s illegal occupation of Crimea by Russia,” – said Tillerson.

He also drew attention to the fact that “Russia has long resisted the introduction of peacekeeping forces, but now agreed, and they put forward the first proposal for peacekeepers. I think it’s important what they say about the right things.”

The chief US diplomat stressed that the position of the United States “is significantly different with respect to those powers who will receive peacekeepers, and the amount of their mandate.”

Tillerson expressed his hope for rapprochement with Russia.

Videoasia needs to take the first step to de-escalate the conflict in Ukraine, Rex Tillerson

“We believe that it is vital to end the violence in Eastern Ukraine. People are still dying every day from violence. And our goal is to stop the killing, stop the violence. Then, we will have a lot of work from all elements of the Minsk agreements. The government in Kiev also has a lot to do. It is a process that lasts, a peace and cessation of violence are our first and main objectives,” said Tillerson.

U.S. Secretary of state noted the role of the special envoy of the state Department, Kurt Volker, in cooperation with Russia in order to solve the delay on the issue of Ukraine.

“Our priority is to stop the violence, and we believe it is necessary to introduce peacekeeping forces,” – said Tillerson.

He also said that the countries-members of NATO discussed how to deal with Russia. Agreed that the normalization of the dialogue with Russia does not happen. To build a dialogue want through periodic meetings of the Council NATO-Russia.

Tillerson called for meetings with Russia only if there is a subject for such meetings and is expected to achieve results.

“Dialogue can’t be just to talk and try to “regularservice” and to normalize relations until you have taken the steps I mentioned, in particular, against Ukraine, hybrid war, before Russia will begin to correct those actions that can not only accept, but also afford. I believe that we will maintain a dialogue, when there is a goal, and the essence of the result we want to achieve,” said Tillerson.

Earlier the US state Department spoke about the topic of the conversation Lavrov and Tillerson at a meeting in Vienna.