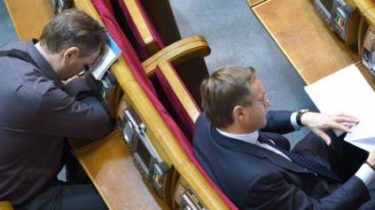 Members of Parliament are going on Thursday, December 7, to vote for the bill, according to which the head of the National anticorruption Bureau of Ukraine Artem Sytnik can fire without the external audit.

About this on his page in Facebook wrote MP from the “block of Petro Poroshenko” Sergei Leshchenko.

Videopublic scandal between the NABOO and the GPU

“So, the vote for the law about killing NABU will be tomorrow, Thursday. As of now, they are going to go for the same scheme, as voted for the law on genprokurora Lutsenko: one day for the inclusion in the agenda, and in General,” – said the Deputy.

Bring the initiators of the law of the case to the end, “depends on our activity,” added Leshchenko.

We will remind, the head of the parliamentary faction “Block of Petro Poroshenko” Arthur Gerasimov and “people’s front” Maxim Burbak have registered in the Verkhovna Rada a bill, according to which the head of the National anticorruption Bureau of Ukraine Artem Sytnik want to dismiss it without an external audit.

Meanwhile, the people’s deputies dismissed from the post of Chairman of the parliamentary anti-corruption Committee of the Parliament Yegor Sobolev.

Videobrass has criticized Ukraine for the conflict with NABU