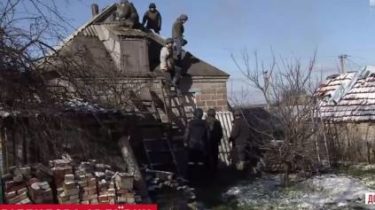 Rescuers from the Sumy region to restore a damaged home in the town, and the local for that certicat the Ukrainian government. The guys that do repairs and build beaten the fire fighters of the roof, homeowners are praising for the good work, says the story TSN.19:30.

But the Ukrainian authorities believe the blame for all the troubles. “We started this war?”, – ask people. Repairmen say that sometimes even this gratitude it is impossible to wait – some just don’t come to work, others silently close the doors for the workers. Behind the master hear talk that the Ukrainian army destroyed everything, so let itself and restores. “There are normal people, you know. And there are – they can prove, and they are,” asks the employee gschs of Sumy.

Videotransit rescuers restore the houses of disgruntled residents of the Town

Rescuers such sentiments of local is not clear – the first time they are working in the ATO area and are amazed that for so many years people take aid from Ukraine, and believe the propaganda of the militants. Not highly appreciate the work of repairmen who are forced to work in flak jackets, as the shelling continued. Local authorities do not bother about the question whether it makes sense to restore what may at any moment again break. Another option, say just no, because people have nowhere to travel but to live somewhere right. Almost every yard of the traces of a failed militant attack on the plant last winter. Then the rebels poured fire Ukrainian military positions and civilian houses. A new winter is still unrestored with five hundred houses.

As reported, Ukraine on Friday suffered another loss at the forefront of the ATO. Only one unit has two dead and three wounded