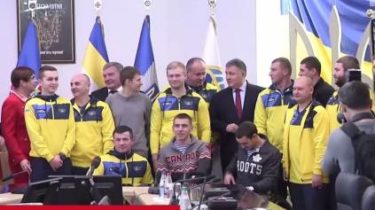 Wounded Ukrainian fighters who won medals at the world “Games undefeated” received an award weapon. 12 registered pistols “Fort” was presented by the Minister of internal Affairs Arsen Avakov, said in the story TSN.19:30.

“Games undefeated” in Toronto, the Ukrainian national team played for the first time and won 14 medals (8 gold) in rowing, archery, powerlifting and running. This competition is a chance for the wounded to resume a full life. Now the guys plan to fight for a place in the team and at the next games in Australia. “Like. Friends gave Dating gave. Canada saw,” admitted the Roman Panchenko. “To continue the service, play sports, go ahead,” stated Alex Pisarenko.

Poroshenko: Ukrainian result for “Games undefeated” is the answer to the Russian aggressor

The head of police Sergey Knyazev has explained that these tournaments are very necessary for veterans with injuries. “The war is not over. Unfortunately, we are losing daily. Every day, our guys get injuries. But they have to integrate into our community. They should not be neglected”, – he explained.