Cemented the head in the microwave: a British blogger was doing in pursuit of views 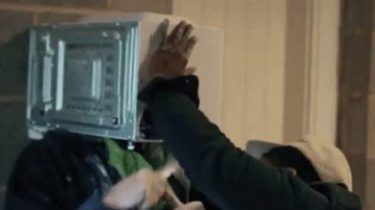 Twenty-two year old J. Swingler from the West Midlands in the UK decided to stick your head in the microwave where his friends cemented it through seven bags of the mixture for filling. And to speed up the process guys, and the mixture was dried with a Hairdryer, reports the Daily Mail.

It all began with a series of clips called “Extreme Christmas” calendar, which friends-bloggers has developed for its channel TGFbro. In the framework of the project every day they perform crazy tasks, for example, bathed in tanning, filled the legs with foam.

But the new plan has surpassed all previous. The head of Swingler stuck in the microwave. An hour and a half bloggers tried to pull it yourself. When failed – called rescuers. Firefighters an hour to cut the guy’s head. Fortunately, it is not affected by the experiment.

“As funny as it looked, this guy could easily choke or seriously hurt,” commented one of the rescuers actions of hill-blogger.

Recall that in late October in London, the girl fell through a window when he tried to do self. On a scene there has arrived operative service, but to save the blogger failed.