“Very delicate process”: Klimkin told about the situation with the exchange of hostages 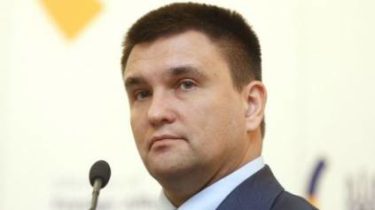 The Minister of foreign Affairs of Ukraine Pavlo Klimkin hopes that the exchange of hostages between ORDO and Ukraine will take place in the coming weeks. However, the process is fairly thin and can fail because of incorrectly interpreted words.

He reported about it to journalists in Kiev, transfers “Interfax”.

“Now consultations: when, how… I’m deliberately not going to tell you details and I apologize, this is a very delicate process and any word that is wrong interpretiruya, can prevent. We hope that this will happen in the coming weeks. Not going to talk about the exact date and hope that it will be extended to the maximum number (of hostages – ed.)”, – said Klimkin.

The foreign Minister added that he discussed with the Minister of foreign Affairs of Russia some of the legal nuances that arise during the process of exchange.

“I wanted to discuss with Lavrov, because if this legal nuance someone uses to stop this process, it will be a real fantastic damage,” he added.

We will remind, in Vienna, Austria was the first in three years, a bilateral meeting of Ministers of foreign Affairs of Ukraine Pavlo Klimkin and Russia Sergey Lavrov.

Earlier, the leader of movement “the Ukrainian choice – the right of the people” and godfather of the President of Russia Vladimir Putin Victor Medvedchuk, who is one of the representatives of Ukraine’s sub-working group on humanitarian issues of TKG, said that the Ukrainian side is configured to the Christmas and new year holidays to implement the first stage of the exchange of hostages and detainees according to the formula 306 fighters on 74 Ukrainians.