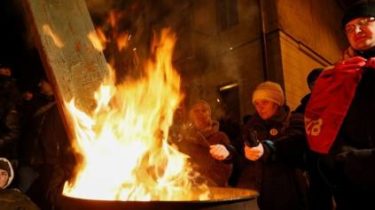 A few dozen activists remained for the night near the building of the security Service of Ukraine, where security forces keep the leader of the party “new force” of Mikheil Saakashvili.

They brought drums, which lit a fire to keep warm, reports “Radio Freedom”.

The other part of Saakashvili’s supporters remained in camp near the building of Verkhovna Rada.

We remind that on 8 December police arrested Saakashvili and taken to the detention facility of the SBU in the Askold lane. Prosecutor General Yury Lutsenko said that now planned investigative actions and appeal to the court concerning election of a measure of restraint for.