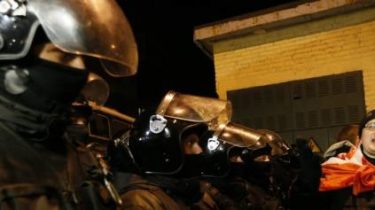 During the attempts of the protesters to set up tents near the SBU, in a detention facility which brought the detained politician Mikhail Saakashvili, clashed with police officers.

Saakashvili’s supporters tried to set up tents but the police prevented them from doing so, citing the fact that protesters are thus in violation of public order. During a scuffle, someone from the sides used pepper spray.