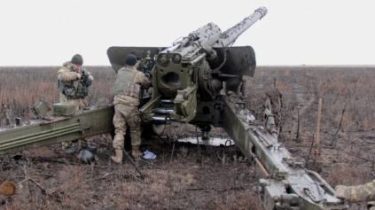 The situation in the area ATO complicated, the rebels deliberately and precisely continue to fire on positions of Ukrainian Armed Forces and are increasingly using mortars of different calibers banned by the Minsk agreements.

The enemy does not reduce the intensity of the shelling and in the evening, using drones, reports the press center of staff ATO.

Resulting from militants ‘ shelling killed four members of the Armed Forces of Ukraine, one injured and another one received a combat trauma.

On Lugansk the direction even for the bright time of a day the occupants of all the available infantry weapons and 120mm mortars fired at our positions near May. Here they have released more than fifty minutes by nightfall the enemy fire had moved a little further North, in the area of PPC “gold”. It is planned to open today, December 9, continues to repair pedestrian bridge in Stanitsa Luganskaya. In particular, fighters from 82-mm mortars and grenade launchers fired at the approaches to the Katerinovka, Novoaleksandrovka and Crimea, and from small arms and rocket-propelled grenades – fortifications near Golden. Also from infantry weapons Russian mercenaries bothered our defenders near Luhansk and Zaytsevy.

The construction of the Press center of staff ATO for the December 8, 2017, the Situation in the area ATO complicated. Russian-ocupaci…

Published by the Press center of the ATO headquarters on December 8, 2017

On the Donetsk direction , the peak of activity of militants came in the first half of the day. In particular, the occupiers have actively engaged in attacks with mortars and the entire spectrum of infantry weapons in the area of Water on the sea of Azov and in the suburbs of Avdeevka. The Heater is on, our position was actively fired by the enemy sniper. At nightfall, under fire from mortars, rocket-propelled grenades and small arms were the defenders of the mine Butovka.

In addition, in the area of Water, Avdeevka, May, Seversk and the village of Lugansk recorded the flights of enemy UAVs, prohibited by the Minsk agreements.

In General, for the last day recorded 28 violations of the cease-fire by the invaders. In cases when the enemy attacks was a direct threat to the life and health of our soldiers, units of the ATO forces answered the enemy with heavy fire from rocket-propelled grenades, machine guns and small arms.

Earlier it was reported that Ukraine on Friday, 8 December, suffered another loss at the forefront of the ATO. Only one unit reported two dead and three wounded.