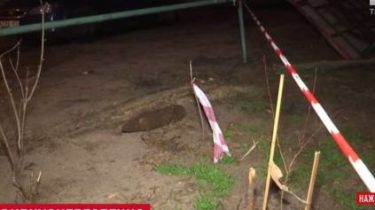 Unexploded shell 70 years had lain under the feet of residents of a densely populated residential district of Kiev. Found him a few hours ago, says the story TSN.19:30.

The bomb was discovered in the wizard when you set up the gazebos and swings in the yard. The projectile was lying excavated 3-4 hours near the residential houses and kindergarten. “Well, we came to Park area. We suggested a resident that there were heating pipes. We moved to the side, I began to dig, dug three holes for the fourth – I see something lying there. I my colleague say, there is a shell? He: Yes, what you were telling! Came looked really shell. It was scary, Yes,” admitted the worker.

Rescuers explored a mine detector area on the subject of whether other apparatus underground. Nothing more was found. Dangerous find bomb experts took away is now known that the shell was taken for disposal at the landfill in Podgortsy village, Kiev region.

Autumn in Kyiv-Mohyla Academy during the repair, found the gun of the late nineteenth century. The revolver is engraved: engraved numbers and crown.