“Again humiliated”: the Russian military did not allow Assad to go near Putin 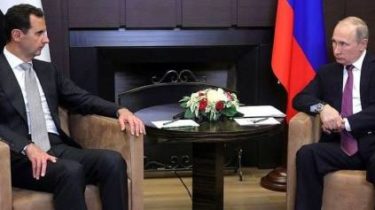 During the visit of Russian President Vladimir Putin at a military base in Syria, Russian troops held by Syrian President Bashar al-Assad, that he waited until Putin will report to the information officers.

A video with the meeting of the Russian President in Syria published RT.

The video shows that after Putin got off the plane, he was met by the Russian military and the Syrian President Bashar al-Assad. Heads of state greeted each other, exchanged two words. Putin said that Assad will speak later.

When the leaders moved away from the plane, the officers held Asad’s hand and said something. He dutifully agreed and stayed behind, while the Russian President listened to the report of a soldier.

The United States called the number of its troops in Syria

Public page of the Stork published in Twitter pictures with Assad and the Russian military personnel by signing the “Russian humiliate Assad again.”

We will remind, the President of Russia Vladimir Putin has arrived today, December 11, at the Russian base in Syria, Mamimi. He gave the order to begin the withdrawal of Russian troops from Syria.