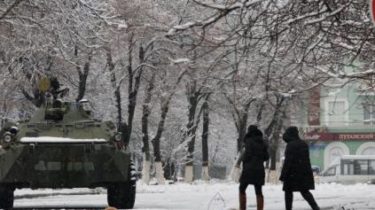 In the area of ATO in the Donbas the militants blocked all entrances and exits to the city Mospino, which is located near the occupied Donetsk. Armed men check cars, go home. Users of social networks suggest that they conduct a “census” of the population.

About it writes “Donetsk truth”.

“In Mospino let in and not let the car. Check the patrols and passport data. Say, Mospino closed on the day,” reads the message public “Budennovskiy/proletarian districts/Donetsk” in social networks.

In the comments one person States that “go home” and it’s like the census.

“The census is likely. Novoazovsk, Telmanovo and Sedov was also closed,” – said another user of the social network.

“To move around the city, but with a passport”, – says Alexander Didenko.

“We have on the street just knocked on the house for five minutes. No one came – went on,” – said a local resident Ivan Levchenko.

“Operative-investigative measures for the presence of illegal occupation and weapons”, – wrote in social networks and clarify that the militants allegedly looking for the two spies.

Some users of social networks write that the militants do not want to explain why blocked Mospino, but promised to unlock the town after dinner.

Earlier the OSCE said the increase in the number of violations mode “silence” in the Donbass.