During the picket near the house Lutsenko, clashes broke out between the MP Bar and activists 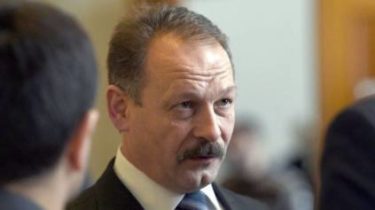 Near the house of the Prosecutor General of Ukraine, which held a protest of activists of “Automaidan”, has not done without collisions.

Several protesters climbed the fence that enclosed the house, but later climbed down, UNIAN reports.

In turn, near the house of the participants of the “Avtomaydana” met the people’s Deputy from “Blok of Petro Poroshenko” Oleg Barna, and several others, who began to say that the activists are acting for money.

Among the participants of the “Automaidan” and a Bar and his people had small skirmishes, during which vs Barney fired tear gas. After that, he together with accomplices went.

According to Interfax, the campaign has already ended and the activists left. It is reported that the house of the public Prosecutor pulled up about two hundred cars.

The activists set up before collecting the checkered blanket on the flagpole, on the walls hung posters and leaflets with a demand to stop the persecution of workers NABOO.

In turn Lutsenko to activists failed, however, commented on the picket line on his page in Facebook.

Recall, today, December 9, the world day of fight against corruption activists “Automaidan” went to the house of the Prosecutor General Yuri Lutsenko for the “Quilt for attorney General”.