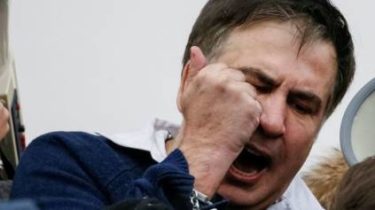 The wife of the detained leader of the “Movement of new forces” Mhala Saakashvili, Sandra Roelofs said from the stage on Independence square, the Ukrainian government “has crossed the red line”.

It is reported by Ukrainska Pravda.

She thanked the people who came to support her husband.

“We want people to live better than the last 4 years. Poroshenko promised a lot. Perhaps he wanted to, but couldn’t. Politics is not business, people are not a commodity. They crossed the red line,” the woman said Saakashvili.

Recall that in Kiev held a March in favour of a bill of impeachment, which was carried out by the supporters of Mikheil Saakashvili. Protesters who took to the streets of the capital, demanded the release of the party leader “the new forces Movement” Mikheil Saakashvili and urged President Poroshenko and Russia’s Prosecutor General Yury Lutsenko to resign. Non-faction people’s Deputy Vladimir Parasyuk says that near the stage on Independence square gathered 20 thousand people, while organizers said about 50 thousand.