Trump approved the US defence budget, which provides $ 350 million for Ukraine 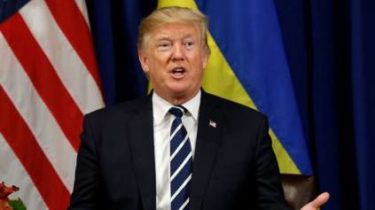 Ukraine will receive from US military aid in the amount of $ 350 million to deter Russian aggression.

It is stipulated in the law on the defense budget of the United States to 2018 bugiani year, which is signed by the President, Donald trump. About it reports a press-service of the White house.

The total amount of the defense budget of the United States is 692 billion. Of these, 4.6 billion dollars would provide US allies in Europe to counter Russian aggression.

The U.S. Senate approved the bill nearly a month ago, on November 16.

Earlier the Ukrainian Ambassador to the US said that provides the US defence budget for Ukraine.

“The law authorizes the provision of our state lethal weapons of a defensive nature and greatly expands the parameters of support of Ukraine by the United States in security and defense spheres. Thus, the document includes provisions authorizing the use of funds in the US defense budget to rehabilitate in medical institutions of the United States wounded Ukrainian military personnel, education and training to Ukrainian medical professionals in this field, as well as to enhance the ability of air and naval forces of our country”, – said the Ukrainian Embassy in the United States.

Also for the first time at the legislative level it is proposed to provide Ukraine the following defensive tools: radar air defense and surveillance of the surface situation, naval anti-mine vehicles, ships, coastal actions, and coast guard.