His fists on the machine and a foot in glass: a bystander filmed the arrest of the foreign exchange scams in Kiev 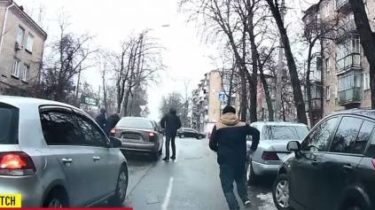 Employees of criminal investigation in the middle of the road in Kiev detained the passengers of the car “Lanos”. It was recorded by the DVR an accidental witness to the accident, says the story TSN.19:30.

The record shows how men are struggling beating on the car and the people inside were closed in the car. Subsequently the group was joined by another man, who kicked the side window “Lanos”. In front of numerous witnesses people without any indication in the police officers pulled out of the car the man wrung his hands and took in an unknown direction. Then the same fate befell the driver “lanosa” – it laid the ground, handcuffed and took away.

Passers-by, the attackers have claimed that they are representatives of the criminal investigation, although in civilian clothes. “Shouting that here there is a capture, then the criminals, some operations, CID. But the way they behaved with them… Get the handcuffs, put, everything. The ambulance arrived and the police because these men who go the Opera, they said – where they were cut, they were taken. Car wheels poprobovali that they could not go”, – said the eyewitness of events.

The whole operation lasted 5 minutes. The police confirmed the information that worked their employees so detained foreign currency Scam that took 25 thousand dollars from a client and disappeared. During the arrest, one police officer was stabbed in the hand.