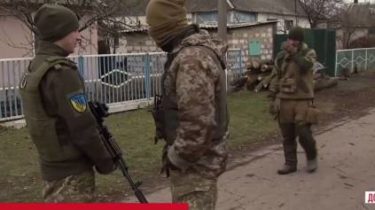 The inhabitants of the newly liberated villages and Gladosovo Travneve fleeing from the Ukrainian army on the territory controlled by “DNR”. So firmly propagandists from Russia, but the Ukrainian journalists see with their own eyes in villages of people who have not gone away, says the story TSN.19:30.

The villagers converge for food, which brought the Ukrainian military and volunteers. Have the separatist documents the residents deny. “All have Ukrainian passports” – repeat them. However, word for word someone stipulates that goes for Russian money in the occupied village of Golm – there receive pensions according to Ukrainian documents, but in rubles of the aggressor state.

With Holmium was covered with fire at the Ukrainian positions, which killed two soldiers. The soldiers say on there site of the former factory of the militants hiding a lot of powerful weapons, among which are tanks, APCS and heavy machine guns. The locals say the soldiers, “passports” separatist organizations, they are not seen, but the Russian documents – Yes. “I saw with my own eyes. With Russian passports” – says one of the fighters. The military say they still have a lot of work to locals stopped to look at the Russians and finally felt to live in a peaceful Ukraine is much better and cheaper than to fight for what is not clear.

As previously reported, the village Travneve in a gray area, which was occupied by Ukrainian troops, gets help from soldiers, but residents complain they have chosen rural power. Officials for the first time since 2014 arrived to their constituents.