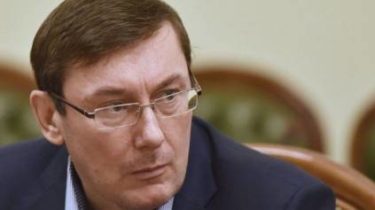 Ukraine conducts ecological examination of the construction of the Kerch bridgeto judge Russia at the international level.

This was stated by Prosecutor General of Ukraine Yuri Lutsenko during a press briefing.

“A very important aspect of our work, as a counteraction to the possible ecological disasterthat may occur due to the construction of the so-called Kerch bridge. Now in the framework of criminal proceedings the Crimean Prosecutor’s office continues ecological expertise”, – he said.

According to Lutsenko, if the likelihood of environmental catastrophe is confirmed, Ukraine will appeal to the countries of the black sea cooperation (Bulgaria, Georgia, Romania, Turkey) “a proposal of establishing a joint investigation team to conduct a pretrial investigation, and then and court on the question of the construction of this bridge.”

“Here possible perspectives – as the correspondence condemnation, and economic sanctions“, – concluded the Prosecutor.

Recall that the length of the future bridge is 19 km away. It is built at the expense of means of the Federal budget of the Russian Federation. The total project cost is around 228 billion rubles (nearly 4 billion dollars). This amount grew steadily from the beginning of construction. One meter of the bridge Kerch on average spent approximately 209 thousand dollars.

Environmentalists say that the construction of the bridge will disrupt the existing ecosystem, in particular, natural water exchange between the Azov and Black seas.