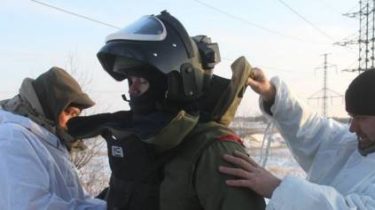 Under the Volnovaha in the Donetsk region was found a cache of explosive German weapons, which had been preserved since the Second world war. Shells in the cache so much that rescuers have declared a state of emergency in the region, according to a story TSN.19:30.

Sapper Yuri works so carefully that not even wearing gloves. “To feel,” he explains delicate work. He’s literally sitting on a minefield, and one by one clearing the ammunition and passes them to a colleague. He carefully lays out no less dangerous discovery is almost the only task in the war, where we must do everything effortlessly. The only way to protect yourself and others from death and injury.

In the Kyiv region police found “the Church battle” caches

The warehouse came across the seekers of scrap metal. Subsequently, the bomb squad assessed the extent of the findings, they say that such sizes of arsenals have not seen for a long time. In addition to the number, specialists were impressed by the quality of ammunition, many of which were with a ready subversive element and suitable for combat use right now. Near the place of the works bomb is a railway track. The military said that if the caches someone blew up the village Olginka could no longer be advanced and the position would get arrivals shells from the rear.