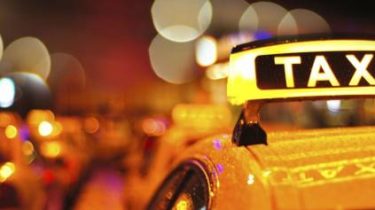 Ukrainian taxi Association accused of ignoring the illegal taxi drivers, which are harmful to the official carriers and jeopardize the lives of passengers. However, the study of journalists found that incidents and even tragedies happen in a taxi regardless of official or illegal, according to a story TSN.19:30.

Ukrainian taxi are divided into three categories: corporate, private cars, taxis, where drivers are entrepreneurs receive orders from the official dispatchers, and illegals. As shown last year, it is possible to get trapped in any of them. Injured from the actions of the taxi driver Elena says that he ordered the car with the condition of several stops through well-known service. But after the first stop the taxi driver began to get nervous and not picked up her husband. “I started it with the left hand to pull the clothes: uncle, stop. The children began to cry. It was very scary because the car was virtually uncontrollable. He hit me with his fist, elbow does not get” – said the victim.

Another taxi driver just drove from the car passenger because she gave the cookies to his son. “It’s my car, and I forbid it. Say, sorry, we don’t eat something, a full meal, it’s not the food that will stain your salon. A child with severe disability, has the toughest group of disability – first and a subgroup of A. To which he replied, well, that is invalid”, – said Jan Korshunova. On the Internet forums themselves taxi passengers the few who supported his typical remarks were such: “we Have taxis transport for normal people who don’t use it as a restaurant, bathroom or bedroom”, “If the cabriolet was a Park then at least crap in the cabin. And so is the property of the driver.”

Taxi drivers have increased fares. Prices will continue to rise

The chair of Ukrainian taxi Association Andrey Antonyuk decided to fight, but not with rude drivers, and illegal immigrants. “Shadowing becomes very large. She in 2013 was another 85%, now has slipped to 99%. The market is open illegally, nobody pays taxes. And most importantly, none of the drivers responsible for the lives and health of passengers”, – he explained. In the situation Antoniuk blames the police, which allegedly condones dishonest taxi drivers, and the first trial have already won. The police believe that the claim should not show leadership, and to each COP separately. “The protocols are persons that are independent subjects of power. But not the national police. The national police, as the authority of the protocols is not,” explains Anna Gromova.

Meanwhile, journalists were not just witnessed cops ignoring the taxi drivers on the Metropolitan railway stations, but also the object of attacks and threats from drivers who were asked to show any of documents for the right to transport or at least insurance.