Saakashvili after his release, praised the judge 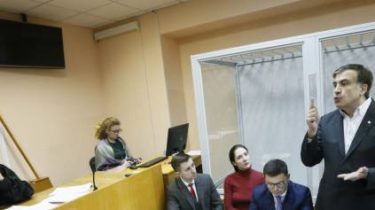 The leader of the “Movement novih forces,” Mikheil Saakashvili praised a judge who refused to arrest him.

“Really very courageous judge. I know that it will now be “run down”. Good for her, did everything right, everything according to the law. The judge had not fulfilled their clear direction. This means that we have in Ukraine is definitely not lost”, – the politician said after the announcement of the decision.

“And judges who?”: Saakashvili’s future determined by a judge, known in cases of Korban and Pukach

According to Saakashvili, after his release from custody he’s going to continue what you were doing before the arrest.

“My next steps is to unite with other political forces. We don’t want to attack someone, we just do not want any coups. We need to press them to adopt the necessary laws, and then to prepare for peaceful constitutional change of power in Ukraine”, – he said.

As reported, the ex-President of Georgia to Mikheil Saakashvili was elected a measure of restraint. Him in the courtroom were released without any conditions. This decision was announced by the judge of Pechersky court Larissa Sokol. This judge was previously released from custody Gennady Korban and transferred him under house arrest. Also zokol was one of the judges over the Deputy Igor Mosiychuk, but then the lawyers won her the challenge. One of the most controversial decisions in 2004, against Alexei Pukach, who was then accused of the murder of journalist Georgy Gongadze, Sokol reversed the decision on opening in respect of General criminal proceedings.